The story of my Jeep Grand Cherokee/Beast Grand Cherokee/Cheap Grand Cherokee started off as any other gear head love story starts – the pursuit of a project. Something to buy on the cheap and build up to be your own, to reflect your own personality and passions. I never actually intended to buy a Grand Cherokee at all.

Just like others, my quest started off on the internet, specifically craigslist. I have always loved the classic Jeep Cherokees or Wranglers of any years. However, I was trying to keep my vehicle purchase budget around $500 – not an easy task. After months of searching I stumbled upon a craigslist add with not more than a sentence and some pictures that looked to be taken with a flip phone. However, this combined with an asking price of $1,000, a location of Jersey City, looked ripe for some low balling. A few days goes by while on a business trip, a few buyers flake out, and I get a phone call from my new boy Dwayne telling me the price is now $800; I tell him I’ll be over in 5 hours (the time it takes to get from Williamsport, PA, to Morris County, NJ for a pit stop at home, and over to Jersey City.

My buddy and I make the trip over to the back waters of Jersey City semi-under Route 78 where we meet Dwayne’s father (a quintessential old timer if I’ve ever met one) who lets us into his repair yard where he works on Peterbilts and the likes. He starts up the Jeep which brings the throaty rumble that can only be made by the 5.2 liter boat anchor from the 70’s powering this machine. My buddy and I crawl all over this thing and make the following observations: where’s the rust? The brake pads and rotors on all 4 corners are brand new; this thing is murdered out; the radiator has a pinhole leak in a plastic end tank; WHERES THE DAMN RUST!?!?

Dwayne makes is way over from his job driving said Peterbilts and offers to let me take a test drive. He alerts us that this was his tooling around car for years and took it to the Poconos and weekend trips. The truck stalls out at highway speeds, which is the reason for the sale. On our test drive around the back waters of J.C. I make a comment about the straight pipe exhaust, which garners a response from Dwayne: “Put your foot down and open her up!” Well you don’t have to tell me twice. V8 glory ensued.

We arrive back to the yard and get to business. I look at Dwayne and tell him my deal is I’m looking for an off-road project and I have $500, which he didn’t find insulting. AS a matter of fact he counters with the fact he has about $600 into it over the past year or two and could let it go for that much. Consider that bitch Sold! We show up the next day with cash and off I go in rush hour traffic to drive my $600 jeep from Jersey City back to Morris County.

I learned a few very important things on that test drive: pulling over several times on the side of the turnpike is exciting, but terrifying and dangerous; be careful after someone else replaces the fuel pump and the truck demonstrates fuel pump related failure symptoms; the A/C works beautifully; and that a V8, regardless or rated power, is intoxicating. I thought the fuel pump may have been overheating since the tank was only ¼ full so I filled it up. During that fill up I  managed to put what seemed like a dozen gallons of gasoline on the ground since the fuel pump seal wasn’t reinstalled properly.

Making it home without further fanfair or fire my friend and I quickly diagnose the need for front U-Joints, a fan belt, a new fuel pump. Fast forward a week and those are installed and we take it for a 4 hour adventure in the woods down ATV trails – oops. Fast forward another week and my race car gets hooked up via tow dolly and gets towed out to PittRace for a weekend for a radiator replacement and a NASA NE crossover race. Because who doesn’t tow 400+ miles through PA to replace a known leaky radiator? 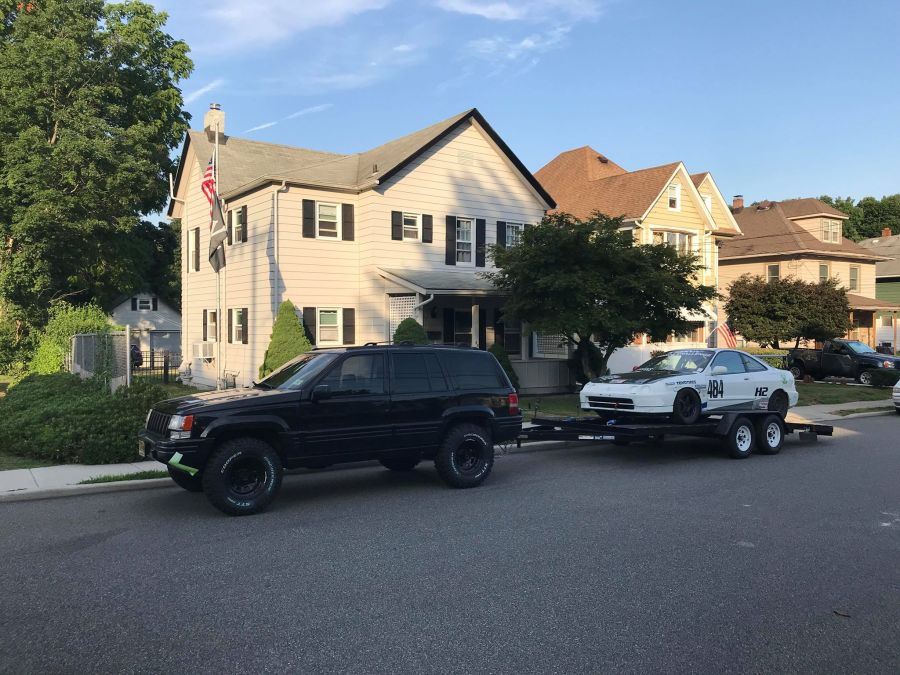 The Beast Grand Cherokee has been remarkably trouble free in the 7,500 miles I’ve put on it and 18 months of ownership and I love it. Only requesting an oil change and top offs for all of the oil leaking out of the oil and transmission pans. However, I don’t want you to think that all cheap car experiences will be like this. What you don’t see in this story is the hours and days spent online doing research about common ailments, repairs, mechanical bits, how much X will cost me when it breaks; the hours and days I’ve spent underneath it performing repairs myself; my gracious mechanic friend Anthony who trades wrench time for time spent Wheelin’; the clever use of Advance Auto coupons; and the research into reliability upgrades.

The key to this entire thing working out is knowing what you’re getting yourself into. A cheap car is cheap until you find several thousand dollars of repairs need to make in order to have a reliable and most importantly safe tow vehicle. The weak link for my entire Jeep is Chrysler’s notoriously weak transmission, the 44RE. However a friend of mine has been towing larger loads with his 6 cylinder jeep with the even weaker 42RE with no breakage – so I made a calculated risk based off of experience. Without that knowledge I wouldn’t be nearly as comfortable hammering on the jeep as I am now.

If done right, there is INCREDIBLE value in a robust used tow vehicle like an SUV. The initial buy-in is usually less because there isn’t any pickup truck bro-tax. With some sleuthing you may find that parts are often shared between those pickups meaning two things: parts of your “new” tow vehicle are shockingly robust (or not lol), and that some of those parts are shockingly cheap because Dodge sold a trillion 1500 Rams, Durangos, and GC’s in the late 90’s through early 00’s. You have lockable storage! Its often smaller than a full sized pickup so using it as a second car or DD is often easier than a full sized pickup. Because you bought it for a used piece of chewing gum and pocket lint, you’re not stressed out if you left the windows down or the doors unlocked. Because if someone steals it they clearly need basic transportation a lot more than you do. Also depending on how shade tree your repairs are, they may pull over because it either doesn’t stay running without the magic touch, or the sheer amount of strange noises it makes driving down the road scares them away.

I long for the day when I can use a full size supercrew pickup as a tow vehicle. However, I imagine that day will never come as the Jeep costs me basically nothing, does everything I could ever want it to, and can smoke Stu Phillips towing through the mountains coming home from WGI.

Do you have a story to share? Something to add, something you agree with? disagree? Shoot me a message, maybe you’ll have your turn!